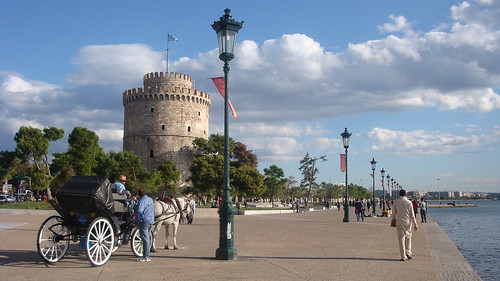 This Saturday, I talked in an event. The event was called UpNorth Conference and it took place in Thessaloniki, northern Greece.

UpNorth was literally decided in a morning. When another tech event was postponed while I had already bought tickets & booked accomodation for the weekend, I started whining to my friends. So they organized a new event to shut me up.

In a span of two weeks, the awesome guys behind cssigniter managed to organize an improptu event jam-packed with lovely talks in a great space in the city. They even prepared goodie bags for all of us. In two frigging weeks, while they were running their own business as well. That’s dedication, people.

I think we had a great mix of presentations, varying from business relations, design, development and freelancing.

Georgios Gatos was the first to talk. His presentation was the perfect start to the day. Relaxed and obviously in his element, he talked to us about how to improve the relations between the different parts of a team, the “biz” people and the “dev” people and the “designer” people. Great insight from the incrediblue project too.

Then it was my turn. I talked about designing for start-ups and about my work in Workable HR. I want to believe that there were some useful take-aways and that it was useful for the people that attended.

Here are the slides:

After a short break, Vassilis talked to us about creating a resellable WordPress template and what the cssigniter experience taught him. It was a really interesting presentation for anyone thinking about joining the template market.

Then it was Michael’s and Vaggelis’ turn. They talked about MVC, PHP frameworks and why they chose Zend for creating the NowDoctor service. This was also the first presentation that really stirred the (development-centric) audience. Some good questions were asked.

Thanos talked to us about freelancing and how to stay afloat in this brave new world. In my opinion, this was the most inspiring talk, mainly because it applied to everyone in the room. Thanos, being a force of nature, really took off with a great start, so after that it was just a matter of saying the right things. And boy, he did.

After the break, Fotis talked about Joomla! and the K2 framework that was created by his team. Joomla! is quite widespread in Greece and many major sites use it. K2 is an excellent – essential even – framework built on top of Joomla! that’s used by big corporations and small sites alike. I’m not familiar with the Joomla! scene, but it was really interesting to see how widespread the use of K2 is. Kudos guys!

Petros, being a Github tech support employee, talked about the Github way of doing things. His presentation was a great primer on Github and described a nice workflow for your team if you already use it for version control (which you should).

Finally, Yiannis presented a great primer on pragmatic responsive design. I think I’m going to save his slides on Evernote and keep it for reference – lots of great tips and tools in there. An excellent presentation for RWD noobies as myself.

This kind of events may seem a bit phoney, in the people-patting-each-other-on-the-back kind of way. I understand why people would think that. But it’s not that shallow.

As Petros remarked late last night, in the midst of fits of giggles, we never once talked about the usual hullabaloo of the greek financial crisis and its effects on everyone’s life. Instead we talked about our shared passions, development and design, about our clients, about freelancing and running a company and food and music and movies, we gossiped and laughed to tears, we started planning a DownSouth event in Crete this summer and the next UpNorth conference next year.

I left Thessaloniki in great spirits. UpNorth was the perfect chance to meet my dear friends and even make some new ones (me! new friends! ha!).

Thanks, first and foremost, to cssigniter for organizing this event, to the people that attended and commented and liked or disliked my presentation and to the ones that just said hello.

Here’s to the next one!